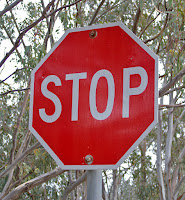 I was pumping gas one day across from an older gentleman when a jacked-up, loud-mufflered, big black truck pulled into the station and stopped abruptly nearby with a large, burly, bearded, agitated dude leaning out the window. “Hey old man!”, he yelled at the guy across the pump from me. “You the guy that just ran that stop sign back there?”.

I, being deathly afraid of confrontations, was ready to flee so as not to witness the potential smack down and/or homicide of an old man by a large redneck. But, also, being an avid noticer of things and people, and also stuck mid-gasoline-pump myself, I froze in place, steeled myself, and peeked around the pump to see the show.

Old Guy, with barely a glance at Agitated Guy, very slowly and deliberately continued his process of pumping gas: squinted at the pump screen, pushed a button, inserted the hose, and then simply said quietly and maybe a bit sadly, “Yeeaaaah, that sounds like me.”

Agitated guy was still hopped up and tried to continue, “Yeah it does, you (something-something)”. I don’t know what exactly he said, but the wind went out of his sails so quick, it was amazing to watch. Old Guy just wouldn’t engage. And Agitated Guy ended up driving away, shaking his head and mumbling to himself.

What do you make of this situation? My reaction included relief, first of all. But then I went into de-briefing (AKA over-analyzing) mode. Did Old Guy defuse the situation intentionally? Was he like a retired Psychologist or Social Worker or Zen Master? Was he just tired? Perhaps he truly didn’t give a shit what Agitated Guy thought of his driving skills? Was there actual sadness in his reply, or did I imagine it there? Was he lamenting his age and the fact that maybe he shouldn’t be driving anymore? These are the kinds of scenarios I try to figure out when I’m people watching. A whole movie reel of characters’ potential intentions and perspectives plays in my head, as I try to figure out their motivations and why things went the way they did. Bottom line in this situation: by not engaging, Old Guy shut it down. Quite admirable.

Morals of the Story:

People can be crazy. Do not engage the crazy.