April 05, 2011
I'm behind in posting my seed starting progress.  On Wed, March 16th, about 8 weeks till last predicted frost, I started my pepper seeds.  I planted two cells of Jalapeno, two of green bell peppers and 5 of the colorful Carnival Mix bells.  I always plant 2-3 seeds per cell and then thin to the strongest survivor.  So they are all up and happy now: 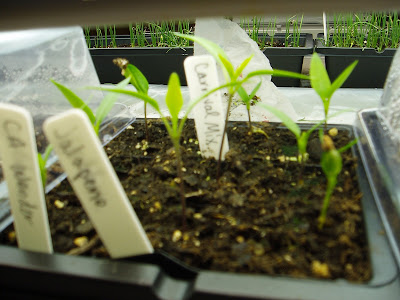 I was planning to start my tomato and broccoli seeds a week ago on Tues, March 29th (6 weeks till last frost) but didn't get around to it until Friday, April 1st.  Close enough.  Mother Nature's behind this spring too if you ask me.  It snowed last week, for pete's sake!
Last night, I went down to water and check on things, and the Romanesco Broccoli seeds are already up!  That's got to be a broccoli land speed record, right?  Three days?  The package says they emerge in 10-21 days so I am feeling pretty dang good about my wicked horticultural skillz.  Here's a pic of my eager little broccoli seedlings: 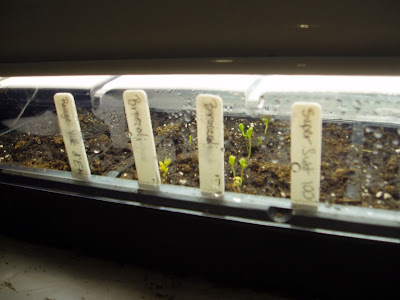 ﻿
I started six cells of broccoli.  I also started my tomatoes: Roma, Burpee Supersteak Hybrid, Brandywine, and Super Sweet 100 Cherry.  I only did three cells of each because my packs are 3 wide and I always end up with more tomato plants than I have homes for.

I still had more seedling flats left so decided to start pumpkins inside also which I've never done before.  I love experiments.  I love pumpkins too.  This year we're growing: Jack-O'-Lantern﻿ (self explanatory), Small World of Color Blend (a mix of blueish, white, spotted weirdos), Rouge Vif d'Etampes, which I believe is an old French variety and looks like a flattish, squat Cinderella pumpkin.  We're also doing Superfreak Goosebumps Hybrid (a warty orange freak), and Jack Be Little (orange) and Baby Boo (white) mini pumpkins.  I planted one pumpkin seed in each cell, and 9 cells per variety.  Math is hard but I figure I'll be able to plant three hills of three plants for each variety when I transplant them out.  Take that, high school algebra.

I also gave my onions a haircut last night, took the scissors to them and trimmed back to about 3" tall.  They were getting a little floppy and out of hand: 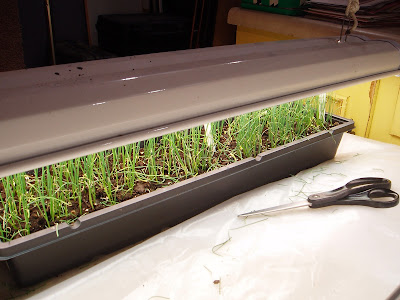 That's about it for now.  We're just waiting patiently for spring!!!