May 13, 2011
Well, spring has sprung I guess, but after all the complaining that Mother Nature was late, I still wasn't ready for her.  The landscaping season has kicked in and that nasty stuff called 'work' is interfering with my own gardening hobbies, so it's been a while since I've posted.

Here's what's new:
1. The tarp experiment to kill the grass failed rather spectacularly, but at least I tried.  The blue tarps still let too much light through and black plastic would have been infinitely better, had I had some.  Instead the tarps made a lovely little greenhouse effect and when I pulled them up found happy, fluffy grass grown higher than the rest of the yard, except for the spots where the rocks were holding the tarps down, those were squeeshed good.  Anywho, gave up and did spray roundup one evening this week between rain showers (rain-fast in 30 minutes? let's hope so!).  The dandelions do seem to be curling up and suffering which brings me at least a little joy while I patiently wait for the area to be good and dead and ready to install the boxes.

2. The boxes are done!  My Mother's Day request was to have help w/ the garden, so Hubby buckled down last week and assembled my boxes and they are spectacular, as is the vintage lawn tractor 'Old John': 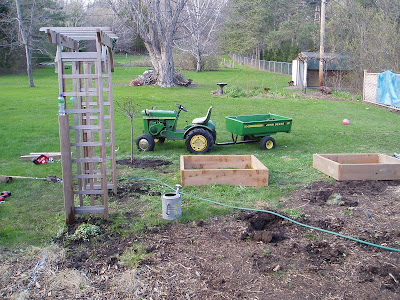 Hubby also put some posts a few feet in the ground and fastened my arbor to them so the dang thing will quit blowing over every time a bird farts.  Eventually there will be a picket fence extending from each side and around the two outside edges of the garden, but for this year I'm thinking a row of sunflowers or something similar for a 'living fence'. 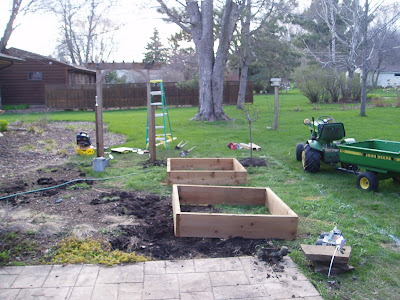 3. Tomorrow is the compost sale at the local university lab farm so composted cow manure, here we come!  I'm hoping Bernie can get a cubic yard brought home in the trailer tomorrow to fill the boxes, to be mixed w/ native soil dug from the back-edge-by-the-woods of our own awesome, heavenly, perfectly loamy, (used to be a cow pasture and now it's my very own) property.

4. The tomatoes downstairs are screaming at me to let them out of their tiny prison flats and into some real growing room.  Hang on little plants, we're almost ready! 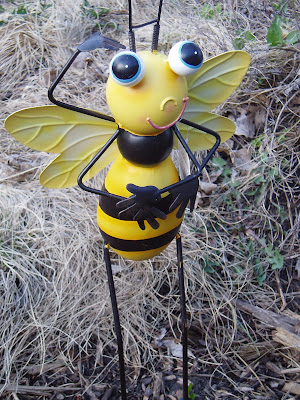