April 13, 2011
Inspired by the kitchen garden book I mentioned a few posts back, I have officially begun to implement my 'Potager Plan'.  The perennial garden next to my patio is going to become a rectangular potager with wooden boxes as raised beds for growing veggies.

I have always been annoyed with the garden next to our patio but wasn't sure why.  I widened it to fit some more plants in, then widened it some more and curved the edge to make for easier mowing along it, and still it just looks, I don't know, like a really boring perennial garden.  Now I think it's not the garden that's the problem, but actually the giant, square, stamped-concrete behemoth of a patio next to it.  It doesn't fit into the scheme of curvy foundation beds around the house. Since it's a little tougher so change concrete, I've decided to try changing the garden instead.

I wanted veggies growing closer to the house, and I can't get much closer here!  The potager will be bordered by the patio on one side, the back of the house on another, and eventually a sweet little picket fence on the two outside edges, complete with a cedar arbor covered w/ climbing roses as another entrance to the space.  I think the straight lines of the potager layout will be a nice complement to the patio shape.  And after all this time designing and promoting curving bed lines and gardens that try to emulate the randomness of nature, I am craving a space with some easy, logical order and definite borders.  An 'everything-in-its-place' garden.  A 'let's pretend I'm actually in control of these plants' garden.

So, the plan is to build 4'x4' square boxes out of 2"x10"x8' western red cedar boards.  Due to lumber costs I am still debating on how many, somewhere between 4-6, but time to hem and haw is running out as spring is finally here!   Also am debating on making one box in the design a sandbox or saving on lumber and going w/ a super-fancy green plastic turtle sandbox in it's place since it would have an equally fancy turtle shell cover to keep the sand dry.

A sketch of the potager plan: 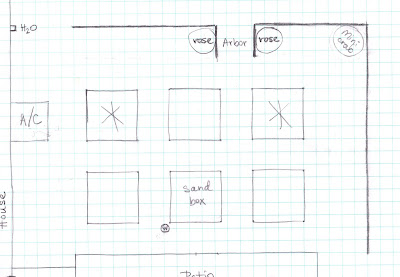 I know what you're thinkin', "She's a landscape designer?"  Well, pipe down, it's a SKETCH, dude.

Anywho, meantime I need to transplant a crapload of plants out of this space to new homes. Over the weekend I moved out the shrubs, 3 Annabelle Hydrangeas and 3 Goldmound spirea, adding them to the now expanding shrub border along the west edge of the yard.  Perennials are just starting to peek their heads out so I wanted to give them more time to show themselves so I know where to dig.  Plus, I don't know where they're all going to end up yet.  Today I raked off the mulch so I could see the remaining plants better.  Probably a mistake since we're expecting freezing rain/snow again in a couple of days, oopsies. Mother Nature fooled me again.