April 22, 2011
Last weekend after the snow melted, Bernie and the Girl and I ventured out to mark out the soon to be veggie plot.  It looks big.  I like it.  We sprayed lines on the ground with marking paint and comtemplated how to kill the grass in the expanded part.  Mother Nature is still being stingy, it's 50 degrees and spitting rain off and on today, and it snowed again Tuesday night (melted again Wednesday), so Roundup won't 'take' as the grass isn't actively growing yet to absorb it.  Plus, I'm trying to go organic in this garden from the very beginning.  I decided to smother the turf instead, which will take 2 or 3 weeks I suppose, but Lord knows I won't have time to build the raised beds before then anyways.  We laid out some old tarps and tacked them down w/ rocks, boards, the arbor, and patio furniture.  Isn't it lovely?  Our neighbors just love us: 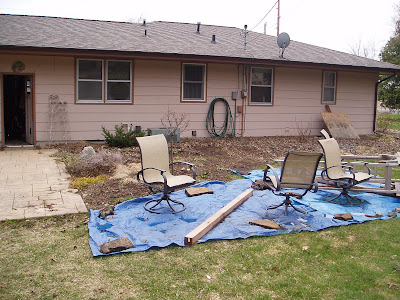 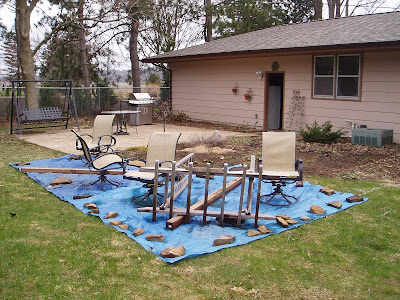 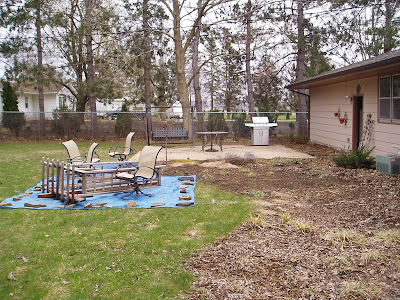 In other news, my seeds downstairs are going crazy.  The onions got another haircut today and are looking happy.  Note for next year: start pumpkins a couple of weeks (at least) later than everything else.  They are going crazy!: 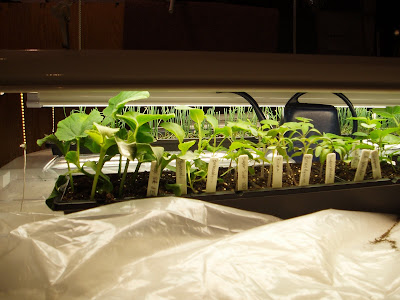 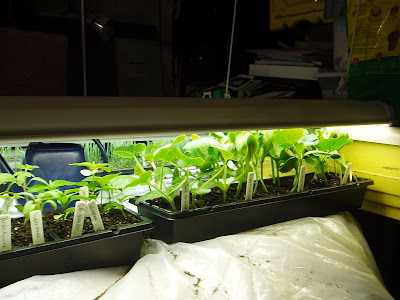 I decreased the timer for the lights again down to 10 hours a day to help keep things in check as I think the pumpkins are going to outgrow their flats before the weather allows me to plant them out.  I think the lights were on 16 hours a day to begin with (just a bit over-enthusiastic perhaps?) and a couple weeks ago I took it down to 12 hours a day.  Poor, confused plants.  They're going to think it's changing to fall rather than spring.  Well, they'll have to get over it.